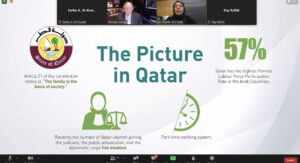 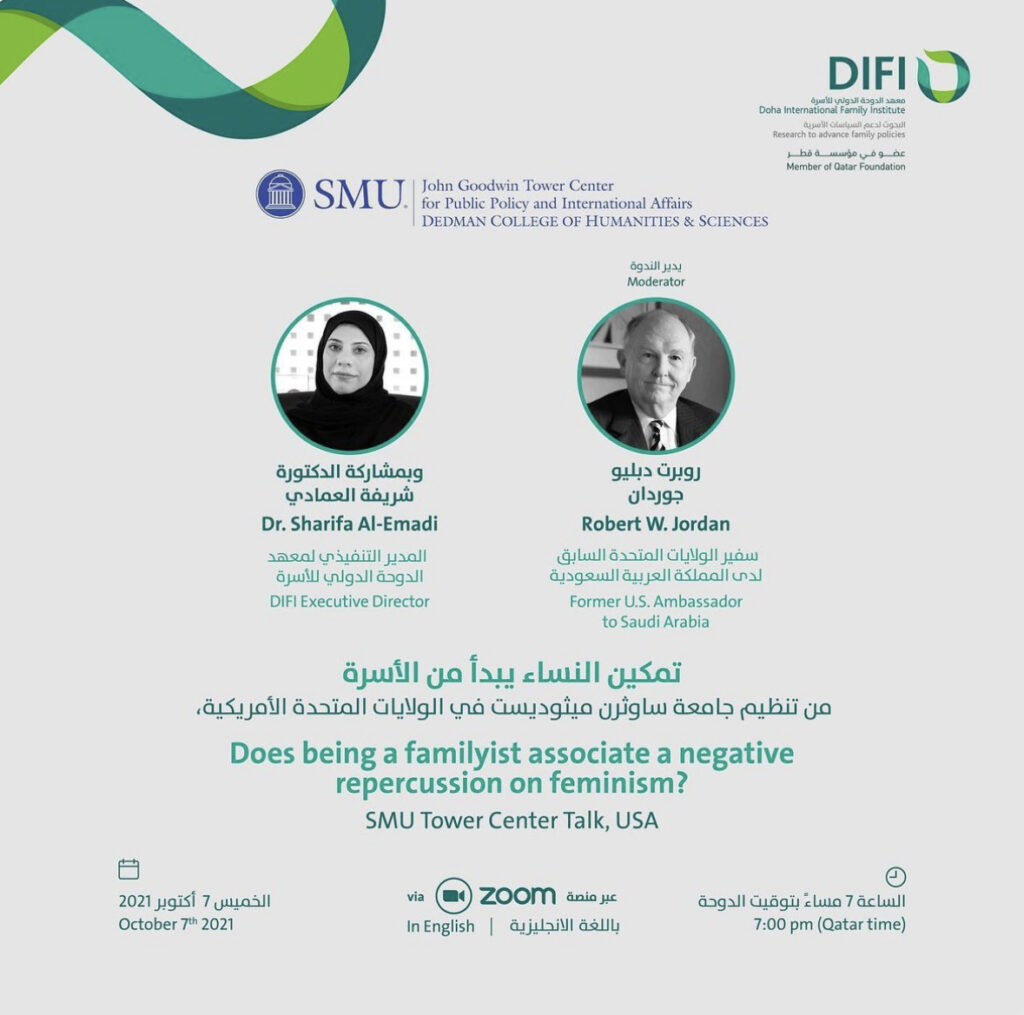 Doha, Qatar – October xx, 2021: Global evidence confirms that empowering women and improving the values of family-work balance are closely linked, according to a Qatar Foundation (QF) expert on family policy, while devising family-friendly policies and programs positively affects the life expectancy of women, their economic status, mental health, wellbeing, and the career prospects available to them.

Dr. Sharifa Noaman Al-Emadi, Executive Director at Doha International Family Institute (DIFI), demonstrated at an that applying policies supportive of the family enhances empowerment at the economic, social and health levels, as well as strengthens their presence in the labor market system.

At DIFI we are aware that women’s empowerment starts from within the family, and that the family, in fact, supports women’s advocacy,” said Al-Emadi. “Therefore, we dedicate our efforts to research that advocates for devising family-friendly policies, which the interest and welfare of the family in general, and women in particular.

The virtual session was organized by Southern Methodist University (SMU) Dedman College of Humanities and Sciences, while the panel discussion was moderated by Robert Jordan, former US ambassador to Saudi Arabia.

The main speaker in the panel, Al Emadi stressed that Qatar provided an exemplary model in family wellbeing. Among Arab countries, Qatar has the highest rate of female participation in the labor force, standing at 57%, including in the the judiciary, public prosecution and diplomatic corps

Dr. Al-Emadi also shone a spotlight on QF’s efforts to bring about change in family-work balance in Qatar, inspired by the vision of Her Highness Sheikha Moza bint Nasser, Chairperson of QF, and Her Excellency Sheikha Hind bint Hamad Al Thani, Vice Chairperson and CEO of QF. Several policies supporting family welfare and women’s empowerment have been introduced, such as adopting the internationally acclaimed 98 days of maternity leave, introducing five days of paternity leave and putting in place flexible work arrangements.

Dr. Al-Emadi also highlighted the role of the Qatari Minister of Public Health, as a female leader, who led the national efforts to make Qatar ranked # 15 internationally and 1st at the Arab level in COVID-19 response.

The Doha International Family Institute (DIFI) in collaboration with  the Qatar National Research Fund (QNRF) is pleased to launch the Fifth cycle of its OSRA research grant, which aims to encourage research targeted at developing a knowledge base on Arab families.